Casa Malaparte (also Villa Malaparte) is a house on Punta Massullo, on the eastern side of the Isle of Capri, Italy. It is one of the best examples of Italian modern and contemporary architecture.

The house was conceived around 1937 by the well-known Italian architect Adalberto Libera for Curzio Malaparte. Malaparte actually rejected Libera’s design and built the home himself with the help of Adolfo Amitrano, a local stonemason.

Casa Malaparte is a red masonry box with reverse pyramidal stairs leading to the roof patio. On the roof is a freestanding curving white wall of increasing height. It sits on a dangerous cliff 32 metres above the sea overlooking the Gulf of Salerno. Access to this private property is either by foot from the Town of Capri or by boat and a staircase cut into the cliff. Casa Malaparte’s interior and exterior (particularly the rooftop patio) are prominently featured in Jean-Luc Godard’s 1963 film, Contempt (Le Mépris).

Casa Malaparte was abandoned and neglected after the death of Curzio Malaparte in 1957. It suffered from vandalism and natural elements for many years and was seriously damaged, including the desecration of a beautiful tiled stove, before the first serious renovation started in the late 1980s and early 1990s. The building was donated to the Foundation Giorgio Ronchi in 1972.

Malaparte’s great-nephew, Niccolò Rositani, is primarily responsible for restoring the house to a livable state. Much of the original furniture is still there, because it is too large to remove. The marble sunken tub in the bedroom of his mistress still exists and functions. His bedroom and book lined study are still intact. Many Italian industrialists have donated materials for the preservation.

Today the house is used for serious study and certain cultural events in Italy and is admired and hated by many architecture enthusiasts worldwide. 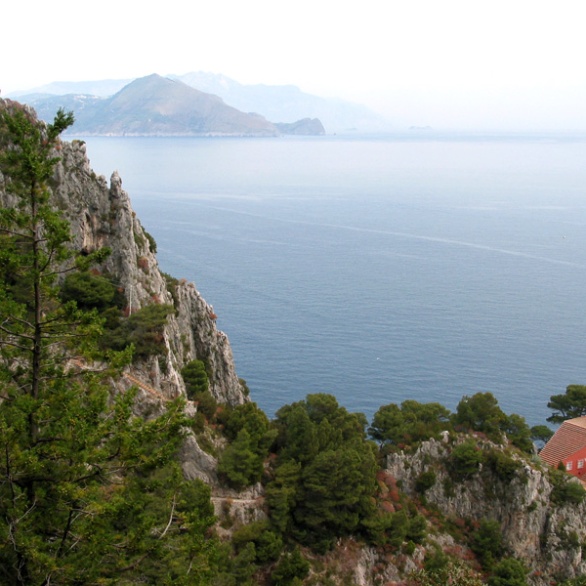 The house can only be reached by traversing the island. The last twenty minute walk is over private property, belonging to The Ronchi Foundation. It takes an hour and a half to walk there from Capri’s Piazzetta at the summit of the funiculare from the Marina Grande. The house can be reached by sea, on calm days only, as the waves are cast upon treacherous rocks and there has not been an official pier for many years. From the sea, one must climb 99 steps to reach the house. Malaparte gave his friend and boatman money to open a restaurant which is run by the boatman’s son today. It is the only restaurant one would pass on the path from the Piazzetta to the promontory where Tiberius built his palace, Villa Jovis.

The book Malaparte: Casa Come Me (A House Like Me) edited by Michael McDonough, includes drawings and essays by many prominent artists and architects, such as James Wines,Tom Wolfe, Robert Venturi, Emilio Ambasz, Ettore Sottsass, Michael Graves, Willem Dafoe, Peter Eisenman, Wiel Arets and many other luminaries of arts and letters. Casa Malaparte was also prominently featured in the Jean-Luc Godard film, Contempt (1963).

A testimonial to my most admired design inspirations by people I truly respect for their brilliant works and ideas...