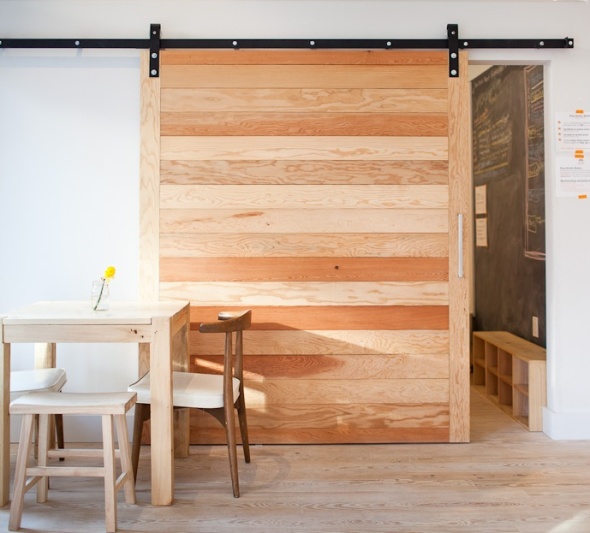 Whether they’re new or reclaimed, the doors lend their rustic, practical sensibility to a space. They save room but are not tucked away like pocket doors, making a virtue out of their rugged beams and industrious hardware.

The rear part of this modern rectangular house is completely open. The transparent look achieved by installing the glass sheets walls from rear house until half-part volume of side of house (vertically and horizontally from first until third floor), and of course full-glass sliding doors. The transparent volume overlooks the waterfront and panoramic view beyond.

Inside, more surprising interior design achieved. Most of each zone has double-height ceiling and the interior spaces meandering around center “inner-tower”. The “inner-tower” clad with wood and contains toilets of each floor and as storage, and a dumbwaiter. Beside of three bedrooms, lounge, utility area, and two studies area, this house has an open roof terrace built at third floor. The simple roof terrace directs connect with main bathroom. The furniture and other interior elements details specially created for this modern rectangular house. This modern house design also has sustainable house features, like cold and heat pump, thermal energy storage and solar collectors.  Designed by Heeswijk.(archinspire)

all things are composed of whole and part

the works of japanese artist keita sagaki are highly detailed drawings portraying a larger figure or image comprised of hundreds and thousands of smaller sketches. his portfolio of painstakingly detailed, multi-layered pieces are approached in this way as the artist was deeply affected by mandara, a form of religious painting in esoteric buddhism, to which he was exposed at a very young age. his father took him to witness the making of this psychological and meditative artistic process at the age of ten. his exposure to mandara was around the same time that the other prominent feature of sagaki’s work, comic-like figures, was beginning to enter his artistic repertoire. now, sagaki begins his especially
image-dense illustrations in ink from one corner of the canvas until the entirety of the work-surface has been covered in his whimsical doodles, ultimately forming a fine-art work when viewed from a distance.

‘all things are composed of whole and part. for instance, the human body is built from 60 trillion cells. moreover, every matter is formed by an atom or a molecule. when all people live in this world, everybody belong to some organization such as a family, school, company and nation, even if we are unconsciousness. let’s broaden your horizons. your country is part of nations all over the world. and, the solar system including our planet is a part of the galaxy. however, the concept of ‘whole and part’ is not fixed. it’s in flux if we interpret from a different viewpoint, the wholeness which we defined is converted into the partialness. domain in the relations of both, it never ends. the concept of my creation is the relations of borderless ‘whole and part’. as i draw a picture in this concept, i want to express conflict and undulation from relations of ‘whole and part’, cannot be measured in addition and subtraction (the whole in the grand total of the part. and the part by the whole division)‘ – keita sagaki

The modern and adaptable Cabin GJ-9 in Norway

This is Cabin GJ-9, a modern adaptation of the standard design. It’s situated in Bjergøy, Norway and it was a project by Gudmundur Jonsson Arkitektkontor. The cabin was designed as a space able to adapt to multiple settings. It was designed with no particular site or environment in mind. It’s also a product for mass-production distribution. The main idea behind this project was to come up with a new concept and a general idea for a cabin that would be able to integrate in a variety of places.

It was designed as a cozy cabin that would most likely be places somewhere where there are beautiful views. The cabin features two volumes. They contain the bedrooms and the service area. There’s also a living and dining space in a glazed pavilion in between these volumes. This area has connections to nature in all directions. The cabin has a large roof that accentuates its design and also provides protection for the terrace during rainy days.

The roof also tends to give the impression of a much larger space that it actually is. The Cabin is small but very well planned. The different areas are nicely separated and yet the whole design is brought together by the terrace and the roof. Since the cabin was designed as a modern space for those who like to spend time close to nature and admiring the views, it has lots of glass walls. And since the roof is very simple and also large, it offers the possibility of creating a roof terrace as well.   (Ganea)

Everyone wants a comfortable and modern apartment, but not anyone has enough money to buy a spacious one. Why a small apartment shouldn’t be fancy too? The lack of space is not necessarily a defect, because it determines you to become creative and more selective with what you buy, putt and want for your apartment. This way, your room is not in danger to become overcharged.

One efficient way to furnish one of your rooms is the storage wall with Pull-down Double bed.  This design is perfect for less spacious apartments or even for a one room apartment. The set in composed from a transformable system with front sofa and bookshelf. With only a easy movement, the sofa becomes a double bed. This mechanism is ideal for studios or for normal apartments. It can be used daily or in other situations, such as guest hosting.

The bed is based on an aluminum frame (CF97) so you can easily transform the sofa into a bed. Due to the high class materials, this transformable system is a long time lasting one. As it rests as a sofa, the system has also a storage space under the seat. The wall’s shelf has a mobile mechanism so you mustn’t discharge it when you extend the bed. This is an economic way to furnish your house without neglecting the esthetics. Compact and multifunctional, with a stylish design, this storage wall with Pull-down Double bed is the perfect solution for a modern house.   (Stavar)

a forum for debate

The centrepiece of DAAR exhibition is a life-sized section through the abandoned Palestinian Parliament in a suburb of Jerusalem – a parliament that has never been used. Construction started during the 1996 Oslo Accord when peace seemed possible and was halted in 2003 after the Second Intifada, or Palestinian uprising, marked the failure of the political process.

The project began with the discovery that – mistakenly or intentionally – the building was constructed on Israel’s unilaterally declared border within Jerusalem. The parliament is partly within Israeli territory and partly within Palestinian controlled land – a small strip, no wider than the border line, is in legal limbo.

DAAR has build the section of the abandoned Palestine Parliament that the border line crosses in three dimensions. This suspended and elongated structure will act as a forum for debate on the future of Palestine during the exhibition.

How can political participation be organised for a partially exiled and geographically dispersed people? Palestine’s complex and developing nationhood offers the opportunity to think beyond the nation state.

For the occasion of DAAR’s exhibition — A Common Assembly — this one day conference will deal with new forms of political action and association – collective protests — in the Middle East and around the world.

The term Common Assembly comes to name a radical form of political participation and collective actions that has been used, in different variations, within different contexts of revolutionary protest from Cairo’s Tahrir square to the stairs of St Paul’s cathedral.

A testimonial to my most admired design inspirations by people I truly respect for their brilliant works and ideas...

simplicity and abstraction…
Blog at WordPress.com.